Casey Hixson Is A Son Of A Bitch (Bowling Green, KY)

Casey Hixson Is A Son Of A Bitch

"To oppose corruption in government is the highest obligation of patriotism." 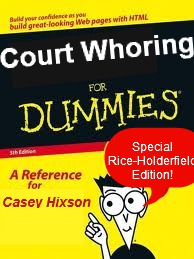 Then I am one of a great many "patriots" alive today.  If it were not for the corruption, cronyism and collusion that exists in the courtroom in Warren County Kentucky, under the direction and diversion of the "Honorable" Judge Catherine Rice-Holderfield, abuser Attorney, Casey Hixson or the numerous corrrupt "cabinet" members I would not be here today.  But not only am I HERE...I will always be HERE..for I am NEVER GOING AWAY!

As Warren County Kentucky has reinforced my fervor for exposing those who intend to do harm to citizens and specifically for punishing a Mother who only tried to protect her son.  Christian Coffey ran from his father's abusive home with permanent damage to his kidneys.  He has been held in the Kentucky foster care system (with whom Rice-Holderfield is deeply involved with) and has done nothing short of beg to be able to be with his non-abusing Mother, Kimberly Harris.

But for Christian it was not in the cards for him to be protected, as with countless of children in the foster care system, Christian would not only be forced to stay in foster care but threatened by cabinet members that they would make his life a living hell, they kept that promise.  He asked his Mother, Kimberly, to help him, not give up on him, fight for him everyday.  She kept her promise, she is now jailed due to blogger activists as myself who exposed the dirty little secret of Rice-Holderfield et al.

Jailed a United States citizen for allegedly speaking out against the injustices that her and her son have faced.  They have accused Kimberly of putting "stuff" up on facebook and the internet.  That's it.  A basic freedom of every United States citizen, Freedom of Speech, has been violated.  Recently the Supreme Court ruled that members of Westboro Baptist Church have the right to protest at a fallen soldiers' funerals.  But don't you dare accuse a cottage government industry of corrupt officials of being just that...in other words..don't call a spade a spade.

The only problem is that Kimberly didn't put "stuff" up on the internet....WE DID.  By we, I mean the bunch of "patriot" blogger activists.  The internet is not new but you would think that the government who is allowed to spy on us plebs by way of "The Patriot Act" would realize that the internet is written in INK...not pencil.  The WWW has allowed activists in every arena to involve social networking, blogging etc. to help their cause.  This could not be truer in the cases of thousands of Mothers who lose custody to abusive men.  Or the countless numbers of GOOD parents who lose custody to child protection services.