This is an OUTRAGE!! Free Melinda Stratton now!!!

Melinda Stratton: Another Mother 'Hunted' Down

Daddy ‘Ken Thompson’ is an alleged ABUSER who ‘hunts’ his victims down. 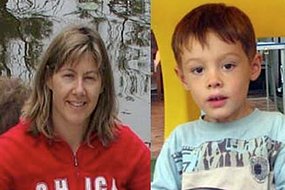 in support of Melinda Stratton and HER son Andrew

There is much going on around the www about Melinda STRATTONand HER son Andrew (not Melinda Thomas -her Male oppressors’ Name and slave master) as AngieMedia a  Fathers Rights site (with a woman’s name)–again wrongly reports.

No mother is a criminal for raising her own child. Parental Alienation a bogus label to falsely stigmatize women & children who want to be free. Similar to the false mental disorder of Drapetomania given to slaves who wanted to be free from their masters. Anyone who tries to take a child from their mother is a MONSTER. Nature made mothers the natural guardian, patriarchy enslaves women & treats children as property.

A 49-year-old mother has told a Sydney magistrate she fled Australia to protect her son and did not intend to remain living illegally in Europe for so long.

Melinda Margaret Thompson was on Wednesday committed to stand trial in the NSW District Court on charges relating to taking her child out of Australia without permission.

At her last appearance, she had elected to waive committal proceedings, meaning the matter would go straight to trial.

In Central Local Court on Wednesday, the wife of former NSW deputy fire chief Ken Thompson told Magistrate Leigh Gilmour she was pleading not guilty because leaving the country "was an act of defence".

During the hearing, Thompson made her own submissions to Ms Gilmour for a second bail application on the grounds of new information.

"I did flee Australia in order to protect my son and I have pleaded not guilty as my act of leaving Australia was an act of defence," she said, via video link from Silverwater women's jail.

"It was never my intention to remain living illegally in Europe for so long."

She said she had been advised she would only receive a sentence of up to one year and had already spent eight months in maximum security.

"I would like to contest I should be expecting a long jail term," she said.

Ms Gilmour said the previous magistrate had already considered the issues Thompson raised, which precluded her from hearing the bail application.

At Thompson's last hearing, the crown had opposed bail.

Magistrate Gilmour set the matter over to the Downing Centre District Court for May 13.

His search through Europe by bicycle ended when the then six-year-old was found last year in The Netherlands.