Million Mom's March day 4 challenge, 4/11/11. Pick up your phone and call your United States Senator, or send an email/ letter if you prefer. If you need to be anonymous, a letter works best. Put "a Voter", your city and town in the return address area. If you don't put a return address of some sort it will not be opened. Tell them you want them

The Mothers Movement is a Persistent, Insistent,  Civil and Human Rights Campaign. We Will Never Give Up Until This Horrible Nightmare For Children and Their Mothers Ends.

This page will be updated as events and information are disseminated through Mothers Day, May 8th, 2011. If you have an event going on anywhere on Mother’s Day please go to the contact and send to us. We will promptly update this page!

For Up to Minute Information: Please Visit the Facebook Page:

Wear White Clothing (see photo's of last year's march and video) and be at 1600 Pennsylvania Ave. throughout Mothers Day, May 8th, 2011. Events follow below.

Wear Cool Clothing and have lots of fluids with you. It will be a long and hot day on the sidewalks of the Whitehouse.

Unite With Each Other through Facebook- for joint travel, lodging, individual events and Camaraderie.

Travel and Lodging: (if you Google search; cheap air or cheap lodging and others you will be able to find more). We placed the following links below to get started with. * Special Offers - Southwest Airlines * Washington DC Hostel’s * Cheap Flights and Lodging *Amtrak *Greyhound * Expedia *Washington DC Hotels/Motels

Mothers across the Nation are losing custody of their children to pedophiles and batterers through the Fatherhood Initiatives’ Program. Fatherhood Funding receives in excess of $500.000.000.00 to fix bad dad, these funds are diverted and used to take mothers children and give them to the abusive father under the pretense of ‘involving fathers’ in their children’s lives.

Mothers across the Nation call for a Congressional investigation into the failure of family courts to protect children and the potential fraud, waste and abuse of taxpayer dollars. Obama (and Congress) you are killing children with the tax payer’s money. STOP FATHERHOOD FUNDING NOW! Sample letter you can use to write to your congressman. 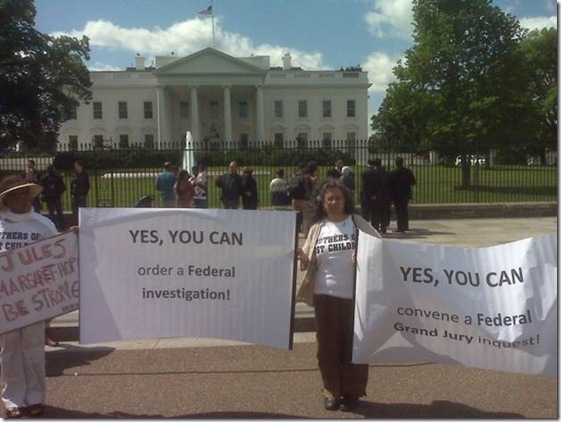 During the past two decades, mothers have been losing custody of their children (even nursing infants) in increasing numbers to fathers who are convicted or identified batterers, child molesters, drug addicts, gang-bangers and felons. Family courts force children into the custody of abusive fathers at alarming rates, allowing these men to continue controlling and abusing their victims.

According to a Presidential Task Force Domestic Violence Report in 1996; state's: "70% of Batterers who seek custody of the children get full custody." Courts Awarding Custody to Abusers and, Domestic Violence Homicides - There is a Connection.

Mothers who stayed in abusive relationships to "protect" their children were charged for 'failure to protect'. Mothers who left their abusers and tried to be "friendly" and co-parent in the face of 'Mandatory Shared Parenting Laws', lose their children to abuser's and Mother's are being ordered to 'Supervised Visitation' or are completely denied ANY contact with their children.

The National Fatherhood Initiative website states in the past 15 years it has "ensured that two million more children are living with their fathers". The Leadership Counci's research conservatively estimates that "over 58,000 children are placed with abusers every year." These statistics are obviously connected. Read more here:

If You Want to Help Organize a Similar Demonstration in Your State, contact Amanda at thomaap@auburn.edu

Corresponding Events are Being Planned on Mother’s Day in Conjunction with the Washington, DC March and Rallies.

Mother's of Lost Children, American Mothers Political Party, Courageous Kids, Mothers For Custodial Justice, Mothers From the East Coast to the West Coast and more Mothers and Organizations are Marching in Washington D.C on Mother's Day, Sunday May 8th, through Monday May 9, 2011. Some of the events and goals through out the day will include but are not limited to;

Mothers, Fathers, Familes and Friends who would love to be in Washington D.C. but can't -- Please Join Us in our local Mothers Day MARCH AGAINST JUDICIAL CORRUPTION – Mothers Day, May 2011. Follow our Facebook page here: http://www.facebook.com/event.php?eid=190065104361414